Are the American Indians Still Lamanites?

Learn More About This Topic 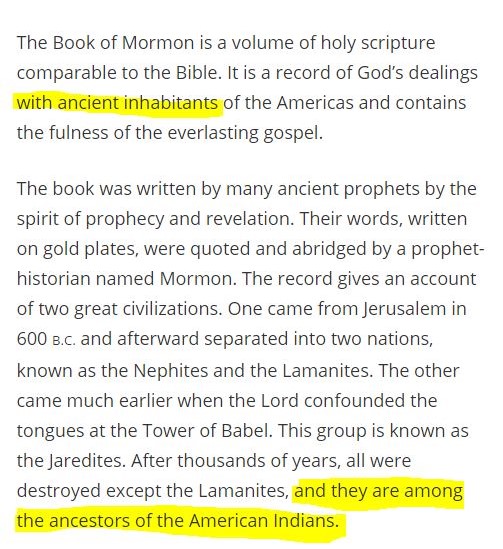 "The Nephites suffered extinction about 400 A.D., but the Lamanites lived on in their degraded course, and are today extant upon the land as the American Indians."
- Apostle James Talmage, Apostle, Jesus the Christ, 23rd ed., p. 49

"... the Book of Mormon tells that a small band of Israelites under Lehi migrated from Jerusalem to the Western Hemisphere about 600 B.C. Upon Lehi's death his family divided into two opposing factions, one under Lehi's oldest son, Laman (see Lamanites), and the other under a younger son, Nephi."
– Encyclopedia of Mormonism, “Native Americans,” v. 3, p. 981

"Lamanites share a royal heritage. I should like to address my remarks to you, our kinsmen of the isles of the sea and the Americas. Millions of you have blood relatively unmixed with gentile nations."
- Prophet Spencer W. Kimball, The Teachings of Spencer W. Kimball, p. 596

OK, Yeah, that's what I remember being taught for 46 years.

"The Ancestors of the American Indians
The evidence assembled to date suggests that the majority of Native Americans carry largely Asian DNA."
- LDS.org essay on Book of Mormon and DNA Studies

“Holy scripture records that “after the waters had receded from off the face of this land it became a choice land above all other lands, a chosen land of the Lord; wherefore the Lord would have that all men should serve him who dwell upon the face thereof.” (Ether 13:2.) Such a special place needed now to be kept apart from other regions, free from the indiscriminate traveler as well as the soldier of fortune. To guarantee such sanctity the very surface of the earth was rent. In response to God's decree, the great continents separated and the ocean rushed in to surround them. The promised place was set apart. Without habitation it waited for the fulfillment of God's special purposes.

With care and selectivity, the Lord began almost at once to repeople the promised land. The Jaredites came first, with stories of the great flood fresh in their memories and the Lord's solemn declaration ringing in their ears: “Whoso should possess this land of promise, from that time henceforth and forever, should serve him, the true and only God, or they should be swept off when the fullness of his wrath should come upon them.” (Ether 2:8.)
- A Promised Land -  The Ensign, June 1976  By Jeffrey R. Holland

5 But, said he, notwithstanding our afflictions, we have obtained a land of promise, a land which is choice above all other lands; a land which the Lord God hath covenanted with me should be a land for the inheritance of my seed. Yea, the Lord hath covenanted this land unto me, and to my children forever, and also all those who should be led out of other countries by the hand of the Lord.
6 Wherefore, I, Lehi, prophesy according to the workings of the Spirit which is in me, that there shall none come into this land save they shall be brought by the hand of the Lord.
7 Wherefore, this land is consecrated unto him whom he shall bring. And if it so be that they shall serve him according to the commandments which he hath given, it shall be a land of liberty unto them; wherefore, they shall never be brought down into captivity; if so, it shall be because of iniquity; for if iniquity shall abound cursed shall be the land for their sakes, but unto the righteous it shall be blessed forever.
8 And behold, it is wisdom that this land should be kept as yet from the knowledge of other nations; for behold, many nations would overrun the land, that there would be no place for an inheritance.
9 Wherefore, I, Lehi, have obtained a promise, that inasmuch as those whom the Lord God shall bring out of the land of Jerusalem shall keep his commandments, they shall prosper upon the face of this land; and they shall be kept from all other nations, that they may possess this land unto themselves. And if it so be that they shall keep his commandments they shall be blessed upon the face of this land, and there shall be none to molest them, nor to take away the land of their inheritance; and they shall dwell safely forever. . . .
- 2 Nephi, Chapter 1, Book of Mormon

OK, Yup.  That's what I learned in primary and Sunday school.

"...Latter-day Saints assumed that Near Easterners or West Asians like Jared, Lehi, Mulek, and their companions were the first or the largest or even the only groups to settle the Americas..."

"The Book of Mormon itself, however, does not claim that the peoples it describes were either the predominant or the exclusive inhabitants of the lands they occupied."

Also, that second statement is preposterous, in light of the quotes above that came directly from the Book of Mormon, itself!

"The Lord took every precaution to see that nothing might interfere with this posterity of Joseph in working out their God-given destiny and the destiny of America. He provided, and so told Lehi at the very beginning of his settlement, that: . . it is wisdom that this land should be kept as yet from the knowledge of other nations ; for behold, many nations would overrun the land, that there would be no place for an inheritance. (2 Nephi 1:8.) The Lord so kept the land for a thousand years after Lehi landed. He so kept it in His wisdom for another thousand years after the Nephites were destroyed, perhaps to give the Lamanitish branch another chance."
- Apostle J. Reuben Clark, "Prophecies, Penalties, and Blessings," Improvement Era, 1940, v. xliii., July 1940. no. 7

"We, therefore cast a glance southward into old Mexico and through the great countries beyond -- down through Central America and South America, where there are millions and millions of Lamanites, direct descendants of Father Lehi."
- Elder Andrew Jenson, Church Historian's Officer, Conference Report, October 1921, p.120

"About twenty-five centuries ago, a hardy group left the comforts of a great city, crossed a desert, braved an ocean, and came to the shores of this, their promised land. There were two large families, those of Lehi and Ishmael, who in not many centuries numbered hundreds of millions of people on these two American continents."
- Prophet Spencer W. Kimball, The Teachings of Spencer W. Kimball, p. 601

"Book of Mormon peoples were “among the ancestors of the American Indians.”"


Has the Lord gone schizophrenic?  What the heck?!?!

Learn More About This Topic
Posted by Seerstone.Org at 9:44 AM